TPC Deere Run Away From the Field:

Despite three separate rain delays the John Deere Classic finished up Sunday with Michael Kim hoisting the trophy. Kim, 25, earned his first win on the PGA Tour continuing the tradition of this event. He flat out ran away with this thing, shooting a final round 65 to finish at 27 under for the tournament. Let me repeat, 27 under par. The true meaning “Live Under Par” campaign by the tour is clear now. It’s how low can we make these tournament scores. I may be on an island by myself with this but I want to see guys struggle some, making par the norm and birdie’s a reward. The golf ball and the equipment has changed the game but what is the USGA, PGA, and R&A doing about it? You can keep the equipment the same and focus on course set up, grow the rough out again, speed up the greens, play some unique courses. Part of the problem is that every year it seems more events are moving to TPC courses. These courses are owned, managed, and maintained by the tour all year around. Look at The Farmers at Torrey Pines and The Genesis at Riviera, the winners finished at -10 and -12 respectively. Honda -8 at PGA National, Valspar at Innisbrook finished at -10. Compared to TPC Louisiana -22, TPC Southwind -19, TPC River Highlands -17, TPC Potomac -21, TPC Old White -19, and now TPC Deere Run at -27. Why not bring in some courses on the Major rotations into the mix? At the end of the day, watching pro’s man handle a golf course with little resistance just doesn’t do it for me.

Joaquin Niemann and Bronson Burgoon ended up having the best showings out of the guys we had discussed last week. Bronson was in the final group and held his own but Kim was on another level. He finished T-2 at -19 with Francesco Molinari, Joel Dahmen, and Sam Ryder. Besides having a killer name, Bronson’s got power and swagger. There was a point in Saturday’s round when it looked like he was playing darts with his long and mid irons. Keep an eye on him as we make the push toward the end of the year and especially in the fall stretch. Joaquin hung in there and posted a 6 under 64 in his final round to secure another top 25 with a T-23 finish. I still can’t get over his swing. That spine angle resembles the likes of Palmer. Whatever the case, us fans are lucky to even be watching him on tour right now. If not for a few errors when applying to USF for his freshman year, he’d be teeing it up for the Bulls in the fall. Seems like everything worked out just fine considering he’s made more than a million dollars in 9 starts this season. I’m looking forward to watching this guy the rest of the season. I think it’s safe to say he will be hoisting some hardware in the near future.

Ian Poulter: The Most Hated Golfer in the World

Ian Poulter has a rep across the world for being an “ass”, ( John Hopkins accent from the US Open, who called Phil a silly ass after his penalty). I can’t stand Poulter, he plays slow, whines about everything, barely kept his card with some medical exemption from 2 years prior and then wins at the damn Houston Open. He gives British people a bad reputation. Hopefully he gets a captions pick so Team USA can skull drag him in the Ryder Cup.

There are two sides to this week’s antics. First off is the Volunteer Marshall, Quintin Jardine, who is a member of Gullane Golf Club. Poulter hit a wayward tee shot into the bushes, on the hole Jardine was working. The other marshal on the hole said he saw the ball down so there was no need for his assistance. No need to go trampling thru the bush for a ball that has been located. Here comes Poulter, dog cussing himself or whoever was in his path it seems. He asked Jardine where his ball was who directed him to the other marshal. Apparently Poulter had expected Jardine to go after it as well because if he would have stepped on it, he could get a free drop. After Ian carried on with his shot, he came back for seconds reiterating his point to the marshal who felt as if he was being unrightfully harassed for this. Poulter did the typical CYA and apologized by tweeting a note from his iPhone 3G. If I had to guess like everything, this falls somewhere in the middle of the two stories but still. Come on man, it’s a volunteer who didn’t do anything wrong. He didn’t block your drive into the cheap seats. You did that. I doubt Poulter get’s an invite for a Saturday game of Wolf at Gullane anytime soon.

Finally, the 147th Open Championship is upon us. Behind the Masters, this is my favorite tournament to watch. Being a history buff, it might be the historic courses, the quaint British towns, or knowing the likes of Old Tom Morris once walked those grounds. I think the brutal weather and the links style of golf has always fascinated me. I have many vivid memories of Tiger and his famous black sweater, black pants, black hat, black shoes combo hacking out of the fescue at St. Andrews. It will probably be said multiple times this week but “this is how golf is supposed to be played”.

The major storyline coming into this years Open at Carnoustie is how burnt out the course is. The combination of Scotland’s cold winter and hot, dry spring has yielded a course that is crunchy, firm, and fast. 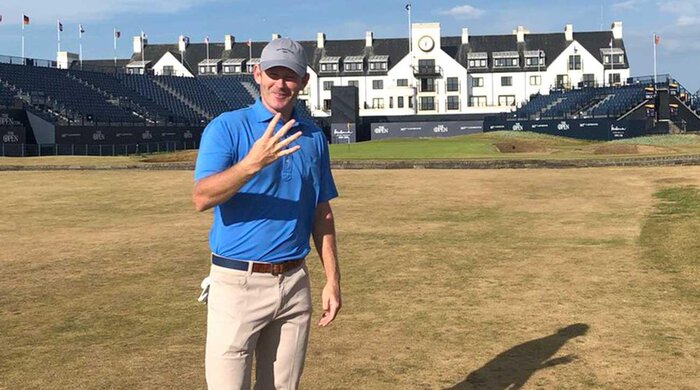 There have been videos from players bouncing a golf ball like a basketball in the fairways. Tiger was quoted explaining “the fairways are faster than the greens”. The greens and tees have irrigation but the fairways don’t. This adds a whole new element for the players. As Rickie explained Wednesday after making the trip up to Carnoustie for a practice round, you not only have to worry about the ball thru the air but now, how is it going to play on the ground. This seems like common sense, but the level to which these guys are calculating their spin rates, carry distance and run out is impressive and will definitely be a major key this week.

Carnoustie’s reputation as one of the toughest test’s in golf makes this Open a breath of fresh air after watching the normal PGA Tour stops of late. Famous for the Barry Burn that has haunted many but no more so than Jean van de Velde who hit it into the Burn in the 1999 Open, which was eventually won by hometown man Paul Lawrie. The “Carnoustie effect” made a young Sergio Garcia walk off the 18th green after his second round, and straight into his mother’s arm’s crying like a little boy. Let’s hope we see some of that this week after the bloodbath the field put on TPC Deere Run this week.

Every major a large number of us from the famed “Golf Wager’s” GroupMe form a pick’em for the tournament, selecting 6 total golfers, 1 from each tier based off of odd’s/OWGR coming into the event. On Wednesday, I will release my picks for the pool. I’ve got a feeling Rickie is going to be my ace after he finished T-6 (1 spot ahead of where I picked him last week) at the Scottish Open. Then there is Big Cat, El Tigre, The Goat, who loves to “stinger” Open courses to death.  When they are running out like this, Eldrick can hit that new Taylormade driving iron he’s testing 300 yards and not worry about hitting it in the thick stuff. 12 years since his last Claret Jug at Hoylake in 2006, something about sweater weather brings out the best in him.

Paddy Harrington said in his Monday presser that he hasn’t seen a course this “firey” since ’06…. Hmmm, I’ll take that as foreshadowing.  The golf world, including myself, will lose their freaking minds if he could win this week. Tiger tee’s off at 10:21 AM EST Thursday and 5:20 AM EST Friday. He is paired with Hideki and Russell Knox who has been on fire after a win at  his native Irish Open. Hideki will probably miss the cut and I’m sure Knox is just thrilled to be playing with Tiger. I hope they all crumble around him. As Tiger said during a clinic at Tiger Jam, “If I intimidate you then, that’s your F*****g issue.” I love it. Step on their throats.
Until then, watch out for Tight Lies,