Obviously, these are the big guns. Vegas will say the winner is likely to come out of this group. As I’ve said in previous posts, I feel Rickie is in a great spot to win this. After a T-6 finish last week at the Scottish, he seems to be in good form.

He said in a post on his Instagram account, cruising in a brand-new G Wagon, that he accomplished everything that he wanted to at Gullane. To me that says it all, he possesses a quiet confidence that I believe will translate well this week. He’s got all the tools; the question is can he put it together for 4 rounds.

Well this is easy, Eldrick “Tiger” Woods all day. Hank Haney, who arguably knows Tiger better than anyone on tour, confidently said it’s Tiger’s week. Now this isn’t just a blind endorsement by someone that wants to play with the hearts of the golf world. Hank has been one of Tiger’s toughest critics over the last 5 or so years. He famously said that Tiger had the yips post-surgery.

Well the yips are gone and coming into the year Haney said Tiger would win a major again, and that a course like this plays into Tiger’s strength. It takes the Driver out of his hand and lets him play to his strength which are his irons. He is long enough with his 2 iron to still have mid irons into these receptive greens. He also has the most experience winning in these conditions on this stage. With all that being said, I’m all in on Tiger. If I had to pick Tiger vs. the field. I’m taking Tiger, and I will be vehemently cheering for him and against anyone in his path. Sorry Hideki and Russell, no love for you guys the first two days. I dream of club twirls and fist pumps of old to be on full display this week.

The remaining tiers are where you build your roster. The goal is to obviously have as many guys make the cut, giving you the best score possible. No one particularly stands out in this group, some people will go with Poulter here but id rather get locked in a broom closet, hanging from my wrists than pick him. Four of the last seven Open champions have been over the age of 40, which points you toward a guy like Matt Kuchar. I like Kuchar a lot and if you pick him I get that. However, I’m between Cabrera-Bello and Tyrell Hatton. Rafa who won the Scottish last year and has a lot of experience on these courses. This entices me but I’m going to go with Tyrell Hatton here.

He has won back to back Dunhill Links Championships which for those who are not familiar with the event, it sets up a lot like the AT&T Pebble Beach where you play multiple courses. Those courses include Kingsbarns, St. Andrews and, you guessed it, Carnoustie. He’s a fiery, emotional player but being from the island and having a winning history on this course, I like this play at Tier 3.

This tier may be better than the previous tier which inherently makes it tougher to choose. This group is full of that “2nd Tier” of American Talent. I’ll start with the guys I don’t like this week, Berger, Kyle Stanley, Fitzpatrick, Perez, Kodaira, and Finau. Well, that eliminates a few names. Branden Grace is another guy who has won multiple Dunhill Links Championships. He also plays well in the major championships, especially the Open. Something about South Africans and links golf just goes well together. Louis Oosthuizen somehow, no matter what form he has coming into the event, get’s up for the Majors. It seems that he shines on the biggest stages and won The Open in 2010. Kisner and Hoffman are the only two Americans that I think have a shot in this group. 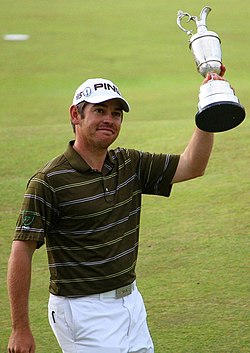 Hoffman played last week in the Scottish, with a respectable T-19 finish. Chuck always seems to come out guns a blazing on Thursday and Friday but never has seemed to hold on over the weekend. Kisner hasn’t had his best year, but I think he has a good personality for this type of golf. He comes across as a patient guy and has a cool and easy type personality. Wouldn’t surprise me if he’s hanging around the 2nd page of the leaderboard come the weekend. At the end of the day, I’ve got to go with the proven guy here and that is Oosthuizen. If they could brew that golf swing, it would be the only beer I’d ever drink again. When the lights come on he always seems to be there on Sunday at the majors.

I’m torn between Jason Dufner and Russell Knox here. Dufner has always been a favorite of mine. He has a great game tee to green but the dude can’t putt to save his life. Watching him putt is like watching an episode of Fear Factor when the contestants are eating rotten cheese, it just makes me squirm. You don’t have to putt great to win the Open Championship. The greens are going to be slow early on in the week if they keep some water on them. If he can hit fairways/greens like usual he will have a chance to be more aggressive. Also, his droll and “ho hum” personality balances out the ups and downs of a major championship. Like I said earlier patience is key on this course and that is a box that Duff Daddy checks. As for Russell Knox, he’s on fire right now after winning at the Irish Open. He has had much better form this season and I’m sure he’d like to carry that over into this week. If he can stay within himself and manage the Tiger Effect the first two days, he will have a chance to make some noise on the weekend. Just because of recent form and experience on these courses I’m going to have to go with Knox.

Tier 6: Everybody else and their uncle.

As bad as I want to pick Kelly Kraft or Bronson Burgoooooonnnnnn, I am going to resist. This tier is littered with past champions, senior tour stars, amateurs, and then your every week grinder on the PGA and European Tours. There are guy’s who’s OWGR are lower than their true play and caliber, for example Thomas Pieters and Thorbjorn Olsen. I mentioned before that this event more so than any other plays to the advantage of the older, more experienced players. Two guys stand out in this tier, Stewart Cink and Zach Johnson. I followed Stewart at Memphis, which I do every year, and the past champion has plenty of length and game left to compete this week. It will come down to his putter if he is going to get into contention. Same goes for Zach Johnson, known to be one of the best short iron and wedge players in the game. With the course being as fast as it is, this will put those clubs into play for him this week. I’m going to go with ZJ, I just think the past champ is in good form after a good showing at the John Deere.

There are my picks for the pool, now for my overall winner. It is hard for me to pick against Tiger and it is even harder for me to cheer for another golfer. If a guy were going to win other than Tiger, I would want it to be Rickie. It feels like Rickie has been my pick in the last 15 majors. Something tells me Rickie is going to win a PGA Championship as his first major. I think that event has less pressure in comparison to the other 3. Alright, y’all already know who I’m picking. I’m doubling down, all in, put the house, the boat, and your first born on Tiger Woods this week. There is obviously buzz around him but I like his pairing with Hideki and Russell compared to the “super groups” that he has been playing in lately. This should free him up to focus on himself and not if Phil is going to rip his golf glove off in his backswing. Any time that Tiger can keep the big dog in the bag and use irons off the tee he is in better shape. Seeing him use something other than his classic Newport 2 is hard to watch but he seems to have a new-found confidence with the mallet. He attributes that to the weight of it and the groves which both help get the ball rolling. If Tiger has genuine and true confidence in his game look out. So, lets lock it in, final answer Regis, I don’t need to use a lifeline, Big Cat claims his 4th Claret Jug at Carnoustie. Let’s Go.

Look out for a course review on Friday and most importantly, look out for the Tight Lies this weekend.