Again? Back-to-Back? You’ve got to be kidding me. I’ve softened my opinion of Bryson after his win last week, but that doesn’t mean I want him to become the “Golden Child of Golf”. First place in the FedEx Cup wasn’t good enough for him, so he went out and won back to back playoff events. This all but wraps up the $10,000,000, The FedEx Cup, and shattered any doubts of his Ryder Cup position. 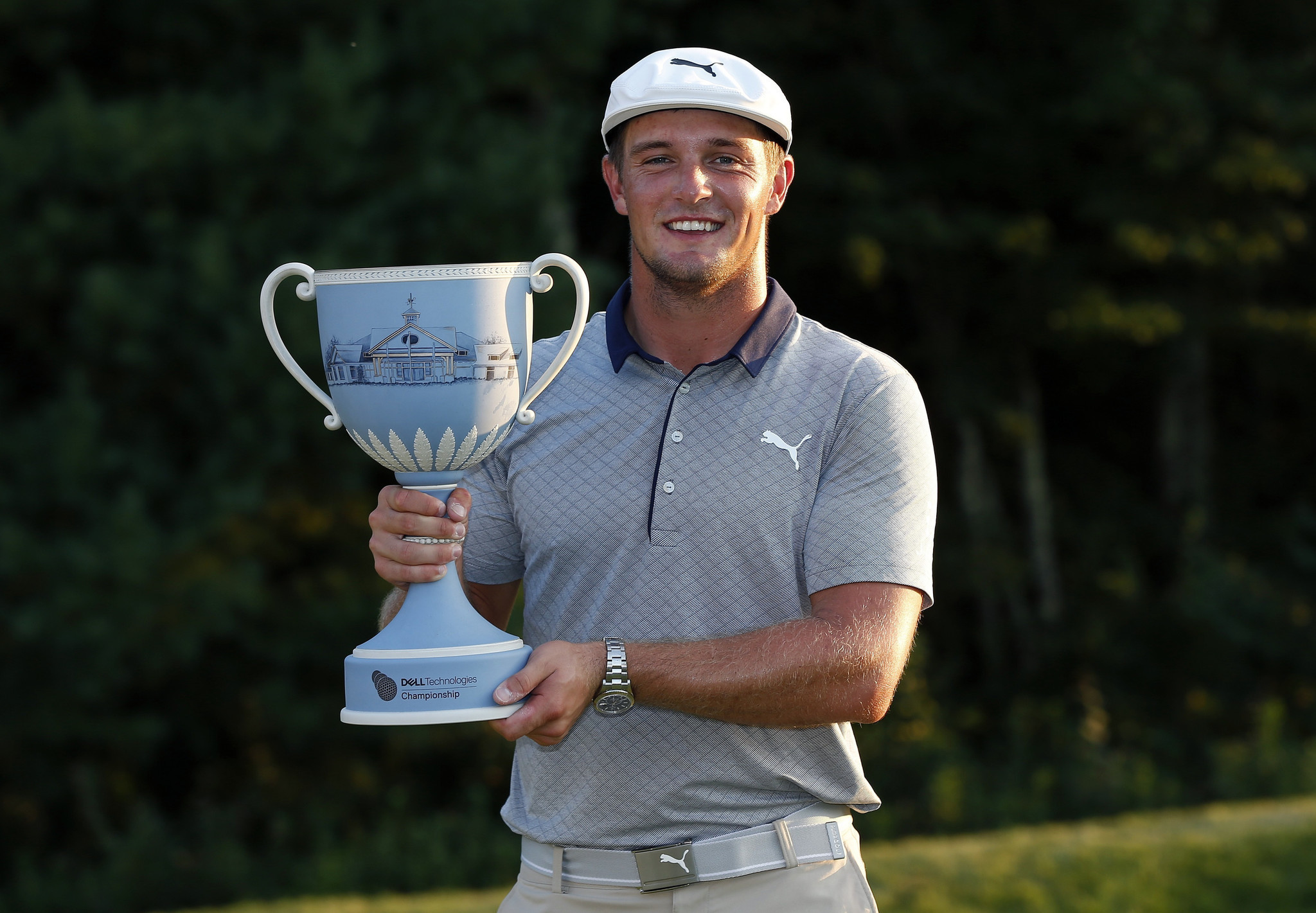 I’m already getting tired of this…

It’s almost as hard to type these words as it is for me to watch him use algorithms instead of instincts to play golf. Top it off with an OWGR that is rising as high as my disbelief. Personal opinions aside, the formula to success is easy to follow. He is averaging more than 78.47% of his GIR, 71.43% of his fairways and picking up 1.47 strokes with his Sik putter over the last two weeks. Of all the math and physics, he does on the golf course, that’s the simplest equation to solve. 4 wins in a mere 70 starts, an impressive feat for sure but he is as streaky as they come. His best is obviously as good as it gets, but man his bad is tough to watch. Right now, he’s riding a heater and keeps putting chips on the table. I’ll tip my cap to that.

The last couple of weeks haven’t come close to matching the excitement that the PGA Championship provided us. Can you take a guess as to why? Tiger Woods. A T-40 and T-24 to start off the playoffs are not what any of us had hoped for but it was a step back in the right direction this week.

I wish he would just stick to one putter. He rolled it so well with the mallet and seemed to really have confidence in it. Then out of nowhere switches to a TaylorMade blade. He finished the week with a very mediocre .190 SG putting which is a big let down considering he hit 71% of his fairways and 69% of his GIR. This again proves that the key is the flat stick. Tiger can hit it all over the park and if the putter is on, it will wash away all of the sins from tee to green.  A gift like mana from heaven showed up on my Instagram feed, a picture of Tiger’s Scotty Cameron Newport 2 back in the bag. The Golf God’s are smiling on this Tuesday now and all seems right in the world again.

The two guys I enjoyed watching the most yesterday were Tyrell Hatton and Cameron Smith. It just so happened they were in the same group together. Tyrell reacts like Spieth on steroids. His relationship with the golf ball is something straight off of and MTV reality show.

Tyrells reaction after his wedge defied the laws of gravity and didn’t fall in.

He is never satisfied, always complaining, cussing at his ball, hands in the air, and provides us with some of the best post shot reactions on tour. As soon as the round is over, he is as pleasant as they come. Having a switch is critical in golf but also life in general. If you can control it and turn it on and off at the appropriate times, it is a powerful thing. Hatton had a great week and shared the lead after his -8, 63 on Friday. He tore it up again with his putter making me want to go to Golf Galaxy and buy one myself. I see him breaking thru very soon on the PGA Tour, he just has too much game and too much fire in his belly not too. The other member of this Sunday pairing, Cam Smith, has had back to back third place finishes to open up the playoffs. That impressive feat has been overshadowed by Mr. Dechambeau but the Aussie hasn’t gone unnoticed.

He posted all four rounds in the 60’s and had a chance on the final hole to get into the club house at -16 before Bryson did. Unfortunately, he left a 7-iron short from 218 and hit it in the hazard resulting in a bogey on the Par 5 18th. Side note, I love the fact that TPC Boston closes with a reachable Par 5, especially one with lots of trouble. It keeps everyone in the mix down to the last shot of the day. These last two finishes have catapulted him into the Top 10 in the FedEx Cup standings and I don’t see him slowing down. After 5 straight missed cuts leading up the Open Championship, he has made 5 straight with a Top 25 at Bridgestone and back to back top 3 finishes. Like Bryson, he has gotten hot at the right time.

DraftKings didn’t go as well as last week due to one man, Kevin Na Na Na NaNaNa Na, missing the cut. Everyone else on our roster scored more than 70 points. I mean come on man, just shoot -1 Thursday and Friday, make the cut, play all four rounds, and make 8 birdies. That’s all I needed. Is that too much to ask for? Regardless some of the bright spots included Emiliano Grillo who finished with 92.5 points in route to a T-7 finish. Tommy, Leish and Tiger all had solid weeks with scores of 81.5, 77, and 73, respectively. To top it all off, Rosey flat out got after it, making 42 pars, 22 Birdies, got the 20-point bonus for 2nd place and another kick for a bogey free round. Total it all up and you get a near perfect 106-point performance. It’s safe to say I won’t be drafting Kevin Na or his yips ever again.

Keep an eye out for our preview of the BMW Championship coming tomorrow afternoon. The holiday weekend of travel has thrown me off. Throw in a trip to New Orleans this coming weekend, the posts are going to be flying at all different times.