There are no sweeter words to a golf fan than “bonus golf on a Monday”. It gives you something to follow along and listen too as you struggle through work after a big weekend. A rain filled weekend pushed the final round of the BMW Championship to Monday but that wasn’t the only gift. We had ourselves a playoff too! That’s like double points weekend on Call of Duty back in middle school. Today was action packed. There were 4 different leaders, a charge by Tiger, multiple bank shots off the grand stands and ultimately a win by the “Peoples Golfer”, Keegan Bradley over Justin Rose. Foreshadowing to Paris, I think so?

Once again, I thought Tiger was going to make a final round push that would be enough to get him into the winner circle. With the red sweater on, it brought back flashes of ’97 and felt like he couldn’t be beat. After a blazing 31 on the front nine, it looked like another 62 was in order and we’d be celebrating Big Cat’s first win of the year.

Then the putter went a little quiet and a few bogeys happened. On a day when the course was soft you knew people were going to go low and that’s what happened. There’s nothing wrong with a final round 65 but coming from a few shots back he needed the magic he had on Thursday. The 70 on Friday killed him. If that round is a mere 2 or 3 shots better who knows what could have happened. The positives greatly out weighed the negatives in Philly. Driving accuracy continues to be on the rise which will be huge next week at East Lake. The irons are still dialed in nicely and that showed with 81% GIR on the week and now 1st SG Approach on the season. Tiger has won twice at East Lake and finished second a half dozen times which leads me to believe he will have another strong performance in Atlanta. This season has been a perfect ice cream sundae, all that is missing is the cherry on top. Hopefully he can get it done this week.

Like I said before there were multiple guys that had a chance to win this thing. Xander started the day off within one shot of the lead and hung in there until the end. Ultimately, he came up just short, finishing tied for third at -19. If Schauffele would have won, I really think he would have made a strong case for the Ryder Cup team. He finished 12th in the overall standings but a lot of those points came from his Rookie Season a year ago. I have a feeling we will see him on the team in 2 years.

Billy Horschel had a strong final round 64 which pushed him into the lead early into the back nine on Monday. When he is on, there is no one more entertaining on tour to watch. The intensity is that of an NFL Safety ready to crack skulls. He ended up with a T-3 finish as well, but is in a good spot headed to East Lake. The real duel came between Keegan and Justin.

Keegan started the day at -14 and flat out rolled the rock all day long. He is known as one of the most accurate drivers on tour, but today it was the flat stick that catapulted him up the leader board. He had putts hanging on the lip falling and dropped a few bombs as well. Rosey was sitting at -17 and in the lead at the start of Monday’s proceedings. He hit 92% of his fairways on Monday…. Yes 92%. Even in soft conditions that is quite impressive. He made 11 pars, 5 birdies and 2 bogeys. One of those wasn’t very timely. Keegan hooked his drive into the left rough on 18 with a share of the lead. Then blocked his approach into the front row of the hospitality tent, had to drop and ended up making a bogey. This dropped him back to -20 and all Justin had to do was make a par. He hit the fairway and then left his approach about 20 yards short. Looking a little tight, he left his pitch about 20 feet short. If he makes the putt he wins. If not, he will be in the playoff. The putt looked good the entire way there but catches the right lip and power lips out to the left. Gotta love a playoff on a Monday. 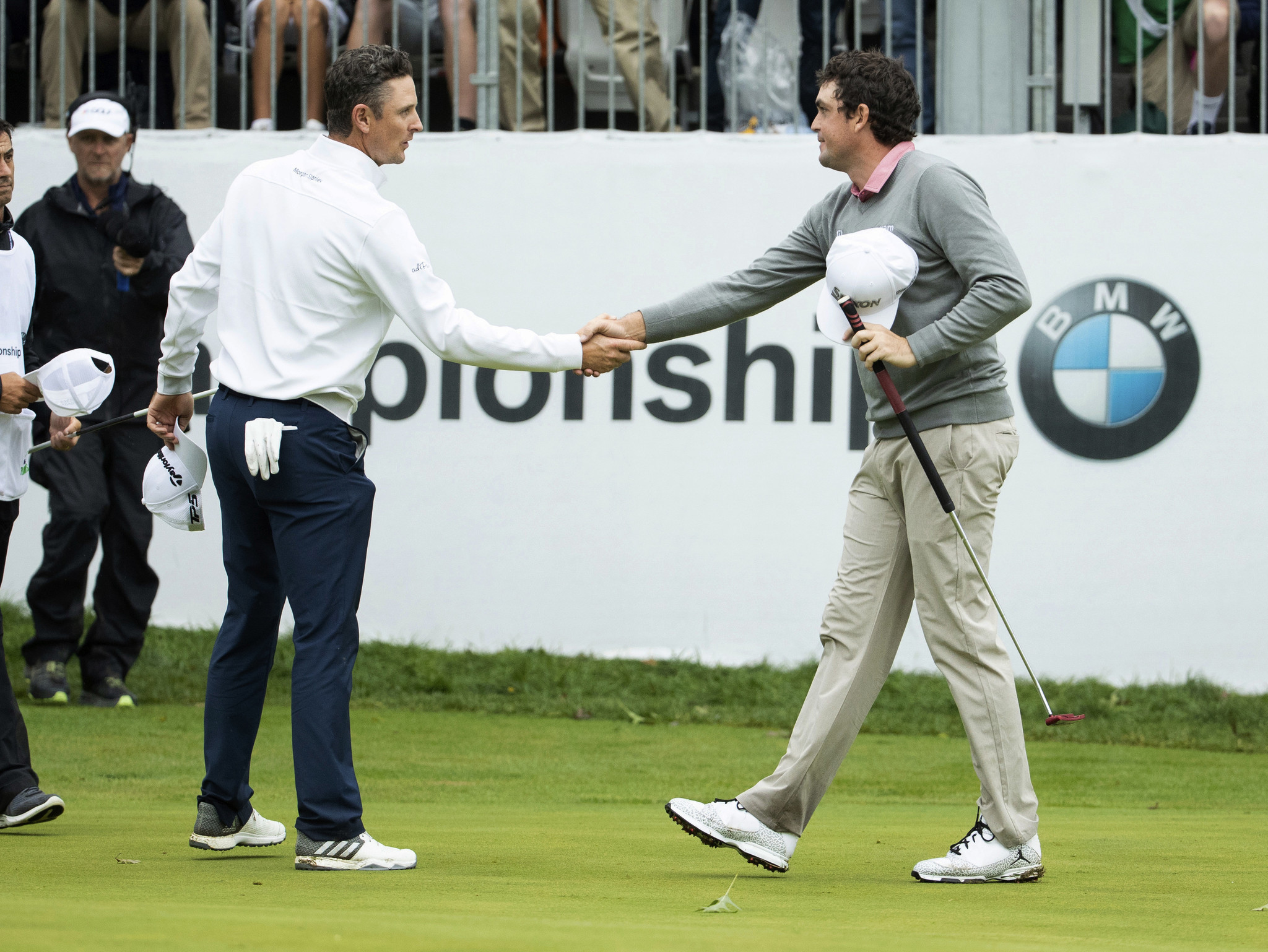 They go back to the 18th tee and play it again. Justin hits his drive in the same spot Keegan did in regulation, opening the door for Keegs who steps up and puts one right down the middle. Both guys bank it off the hospitality tent, which is way to close to the 18th green, forcing what looked to be a chipping contest. However, both guys pull putter out. Keegan lags his up to about a foot, putting the pressure on Rose. The ball hops on Justin and comes up about 5 feet short. Needing to make the par putt to extend the playoff, he burns the edge and has to watch KB tap in for the victory. If there is any consolation to loosing in a playoff it’s becoming the #1 player in the OWGR with only one event to play. I think he’d like those first few shots as World Number One back. Big congrats to Keegan and his young family on the victory.

Clinching his first win in 6 years in front of his son and wife had to be sweet. There was a time after the anchoring ban that looked like we had lost another promising American golfer but this year has shown he has figured it out. I would have liked to see his fiery personality and driving accuracy on the Ryder cup team but Finau had it locked up already.

As much rain as there was at Aronimink it is a miracle a golf tournament could even be played today. The course was lift clean and place from the fairways which helped but it made the course play very long. However, the soft conditions allowed for most guys to fire at pins, resulting in the majority of the rounds finishing in the 60’s. There were some big numbers out there which shows that even in more advantageous conditions, this golf course has plenty of trouble. I can’t say enough about the work that Gill does with restorations because the course was beautiful and really highlighted the original Ross design.  I’m pumped to play one of his original designs, Mossy Oak Golf, in West Point, MS this weekend.

With the BMW behind us, we have a week off before the 30-man field tee’s it up in Atlanta. Here are the guys that qualified for East lake:

Most of the Big Dogs are there but one guy that missed out by one spot is Jordan Spieth. To be honest with the year that he has had, he would have been very lucky to get in but it’s strange seeing a guy on the Ryder Cup team not make the final playoff event. Regardless, there should be quite a few fireworks at East Lake in 2 weeks.

I’ll post something later this week about my after work round at Windyke Country Club tomorrow and then will have a big write up about my round at Mossy Oak on Monday. After that, look out for a big Tour Championship Preview on Wednesday. Don’t forget we still have white, grey and tan hats left if anyone is interested. Reach out to me on my social media and I’ll get one to you.

Stay out of the Tight Lies,