The final page of this years PGA Tour yearbook will be written this week in Atlanta. It has been a long and winding road since the start of the season in Kapalua back in January. We started the playoffs with 125 players and now there are 30 vying for not only the Tour Championship trophy but their shot at the larger prize, the FedEx Cup. $10,000,000 remains within reach for all of the players in the field this week, obviously some have an easier route than others. The Top 5 in the standings will take home the playoff title with a win. Simple enough right? Well after that it gets a little more complicated. For Keegan, who sits in the 6th position, a win must happen but Bryson must finish T-2 or worse. The past FedEx Cup champ Billy Horschell needs Dechambeau to finish in a three-way tie for 3rd, Justin Rose finish in a three-way tie for 2nd or worse, and Finau T-2 or worse. The further we delve into the rankings, the more challenging it will be. There will be a ton of talk about the different ways a guy can win the FedEx Cup, but I think it’s important to focus on the course. 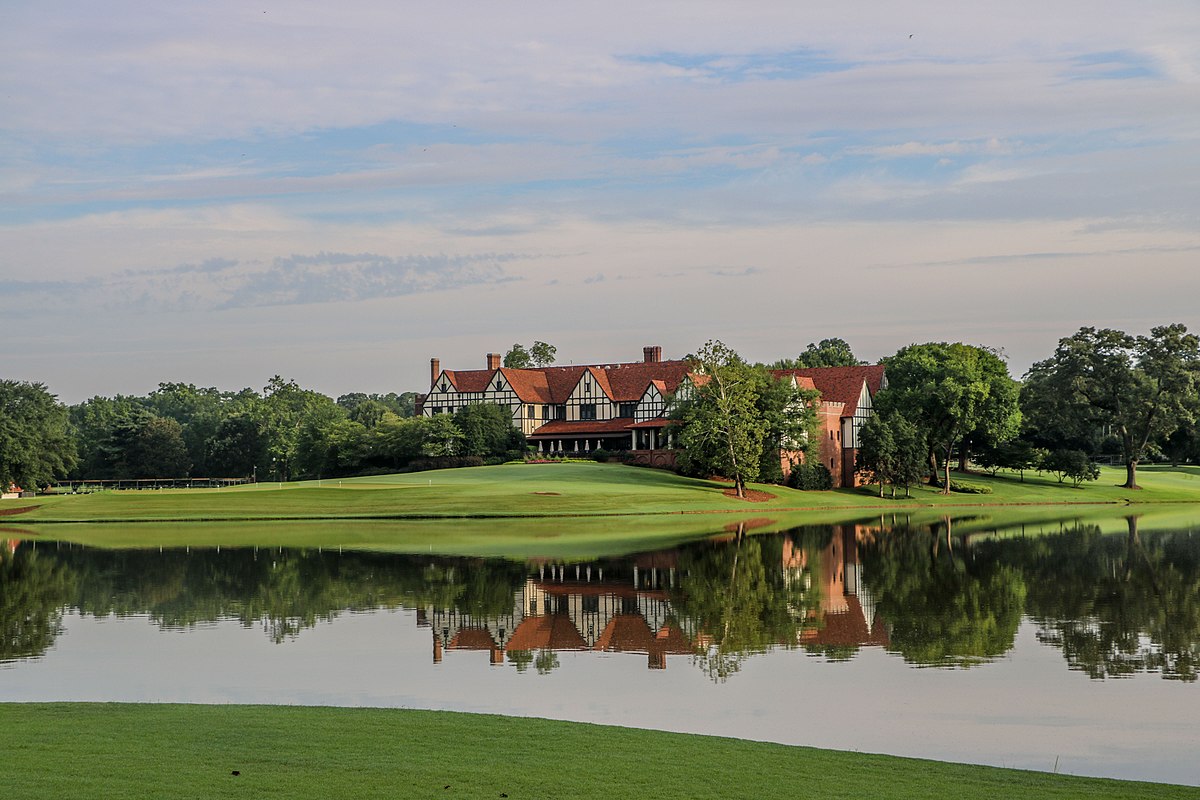 The clubhouse behind the 18th at East Lake.

East Lake Golf Club sits firmly at the table of prestigious courses in America. The club has hosted numerous amateur championships, the Ryder Cup in 1963, the US Am. in 2001 and has hosted this event 14 times since 1998 and became the permanent host in 2005. The original course dates back to 1904, when it was designed by Tom Bendelow. Shortly there after in 1913 the famed Donald Ross came in and did a massive renovation which remains the basis for the modern course we know today. Rees Jones restored the course to Ross’ original design in 1994 and most recently in 2016, the club announced they would permanently reverse the nines. The course will play 7385 yards and at a par 70 instead of the normal par 72 due to two Par 5’s being shortened to Par 4’s. Like most Ross designs, the bunkering is exceptional, green complexes will be perched, large, and full of undulations, and the fairways will be tight. Sounds like the perfect formula. One hole that I have my eye on is the 211-yard Par 3 15th.

It is East Lake’s version of the Island at Sawgrass. Water on three sides, and a larger bunker stretching the length of the green on the left side makes this long Par 3 on of the most intimidating shots the players will face all week. Nothing like a 5-iron into this green coming down the stretch on Sunday. Another hole to watch is the Par 5 18th, which gives players an opportunity to take a chance and possibly pick up a shot or two on the field on the final hole. However, players beware of the winding, narrow fairway and heavily guarded green when hitting your approach shots. This week should be an exciting week of golf at one of the Tour’s trademark venues.

Let’s get into some picks. With only 30 players to choose from the margin of error is even slimmer when it comes to Draft Kings. There are going to be quite a few people with identical or very similar line up’s so you have to choose wisely.

Coming off a T-6 finish at the BMW and a much-needed extra week of rest, Tiger has one final opportunity to get into the winner’s circle. The last time Tiger won at East Lake was 2007 but he has nearly a half dozen runner-up finishes here over the years. Last week showed me that he can still go really low, and with the Scotty back in the bag, that gives me even more confidence. I also love the way he is hitting that 300-yard control cut which still keeps a short iron in his hand. People keep talking about how he’s not long anymore, well he’s 32nd on Tour in driving distance this season. I can’t think of anything sweeter than a walk-off victory for Tiger on Sunday. The golf world would be on fire going into Paris. We can only hope.

Tiger after his win at East Lake, hoisting the 2007 FedEx Cup.

Rickie made his playoff debut last week in Boston, after sitting out the first two events with an oblique injury. He played well all week, posting 4 rounds in the 60’s, which was good enough for a T-8 finish. We all know that Mr. Fowler is a birdie machine, which bodes well for DraftKings. Rickie has had a great year but lacks a win as well. As far as stats go, he is one of the most consistent on tour this season. He is top 40 in SG Putting, top 30 in Approach, SG Around the Green and Tee-to Green and Top 11 SG Total. Those are stat’s most guys would kill for. I see him having at worst a Top 5 and wouldn’t be surprised if he is in the hunt on Sunday.

“Golf God’s, is that you? Can I please get a win this week?”

The reigning FedEx Cup champion enters this week in 5th place in the standings. So all he has to do is win, and he repeats. The only issue with that is, JT has defended a total of zero of his titles this season. Granted that is no easy feat for any player or even any team in other sports. Still there has only been one player to win multiple FedEx Cup’s and that’s Tiger. This makes me thing it isn’t going to be JT this week, however he will be giving it his all, so I expect a lot of birdies and an eagle or two from him this week. Since his win at the Bridgestone his worst finish was a T24 at the Dell Technologies Championship so he is still in good form. He did show up to his press conference today with a taped wrist which he said he tweaked on the back nine at Aronimink. Luckily with the extra time off he was able to rest and says he is ready to go this week and in Paris.

I’ll go on the record stating I am indifferent about Bubba and some of his antics. Some people love him, some people hate him, I fall on neutral ground with him.

This is a business decision. A switch seems to flip when Bubba enters the state of Georgia. The two-time Masters winner has played well in the Tour Championship whenever he has made it to East Lake. We all know that the strength in Bubba’s game is his driver. He is 2nd this year in SG Off the Tee but is also 30th in SG Tee to Green and 35th SG total. After a T-7 at the Dell and T-16 at the BMW I think Bubba will continue that good play as he looks for his 4th win this year and the upcoming Ryder Cup.

The last two men on my roster include the Players Champion Webb Simpson ($7,500) and the reigning Tour Championship winner Xander Schafulee ($7,000). You can’t go wrong with either of these guys on your roster, especially Xander after his performance last week at the BMW. At the end of the day I think this is Tiger’s week. He only has to beat 29 other people and he always has performed with his back against the wall. Do you think he wants to wait 4 months before he can have a crack at another win? I don’t think so.  Let’s go a head and shoot 64-66 and bring the rest of the field to their knees before the weekend. Nothing would make me more pumped going into the Ryder Cup than a win by Big Cat. If for some reason, Golf’s Steph Curry, Bryson Dechambeau wins, I might lose my mind. He’s an alright dude but he is to the game of golf, as the Golden State Warriors offense is to the NBA, a travesty. So please Tiger, I beg you, just do it.

Be on the look out for our Mossy Oak Review this week. Will and I had a great round out there on Saturday and I really think you all will enjoy the photo’s we took out there. If that isn’t enough tune into the first episode of the Tight Lies Podcast that will air on Friday.

Until then,
Stay out of the Tight Lies.