With the Hero World Challenge behind us, it seems only fitting to look back on the crazy year of 2018.

1 year and two days from today, Tiger Woods made his first tournament appearance post spinal fusion at the Hero. His OWGR coming into the event, 1,199. Now, he sits at 15th. that is truly remarkable and makes the over 500 spot climb that Kevin Kisner made a couple of years ago look like child’s play. We had DJ start us off with win at the Tournament of Champions that would spring-board him to the #1 ranking in the world.

The season started off with a bang, fueled by Tiger’s comeback and top 25 in his first full field event at the Farmers. JDay, Rhambo, JT, all got wins in the first 8 events. With a few surprises like Patton Kizzire and Ted Potter getting wins on the West Coast. Bubba began his big season with a win at Riv, where Tiger would have a humbling missed cut. Phil channeled his inner Ponce De Leon and found the fountain of youth down in Mexico, breaking an over 4 year win less streak. Ultimately starting the trash talk between Phil and Cat that brought us “The Match”. Little did he know, he almost awoken the beast.

Tiger nearly won at the Valspar but was edged by Paul Casey, who will probably never be remembered for winning the tournament. Tiger has said since then that it was good that he didn’t win that tournament because it would have been too soon in the process. Love it. Rory was able to get a win at Arnie’s Place, followed by Bubba’s second win of the year at the Match Play in Austin. Mud ball and all, Bubba was putting himself in the hunt for the FedEx Cup and a more important automatic bid for the Ryder Cup.

My open expression of disdain and dislike for Ian Poulter and Patrick Reed has been well chronicled, but there may not be a worse two-week stretch possible than the one that happened in early April. A time that is reserved in my mind, body and spirit for Sunday Red, I still have not gotten over what transpired. Ian Poulter was down to his last event to keep his tour card coming off a major medical exemption, and what does the bloke do? He wins the damn Houston Open, sealing his card for two more years, getting him into the Masters, and making him realize he can beat Americans again, something that would come in handy in September.

What could make matters worse you might ask? Someone by the name of  “Knick Knack Fatty” Pat Reed winning the most sacred of all golf tournaments. I mean you’ve got to be kidding me. If Tiger would have been in the mix and lost to “Private America” ,as I will now call him, I would have lost it. I digress…

The lead up to the Players and US Open brought us two more first time winners, Satoshi Kodaira and Andrew Landry at the RBC and Texas Open respectively. Golf’s 5th major may have been the most boring I have watched over the years, no offense to Webb Simpson running away with the thing, but it just didn’t have the juice of the big names in contention. Trinity Forest brought us the first new age, modern links to be featured on tour, sadly it played firm and had no wind. Aaron Wise liked it, giving the Rook his first win. Followed up with wins by Rosey, Bryson and DJ. All of which would have monster years.

DJ couldn’t become the first to win a major after winning the event prior, but his so-called “good friend” Brooks found a way to repeat at Shinnie. Like, who does that? Erin Hills and then Shinnecock Hills? I guess, if the course has “hills” in it hes going to take it home to mama. Follow that up with Triple Bubba, as he won the Travelers, and then we are introduced to Mr. Moli himself in his finest form. Coming off a win at the BMW PGA on the European Tour (their biggest event) he put on a ball striking clinic running away with Tiger’s tournament at the Quicken Loans. Little did we know, the biggest event of the year would happen a couple of weeks later.

Tight Lies Golf was born July 11th, 2018, just in time to post our first preview of the JDC. While we are here, the last 5 months have been pretty awesome. I’ve said numerous times how this started as just an outlet for myself, but has turned into something that I truly believe people enjoy. It has allowed me to grow as a writer, content creator, camera man (still have my amateur status), marketing director, podcast host, etc. Ryan at G&E told me you will be amazed at all of the skills you are able to sharpen by doing this and boy was he right. I can’t wait for the new season to get started and warmer weather to get here, because we’ve got a ton of great stuff lined up. Now back to your regularly scheduled programming.

Skipping thru a bunch of irrelevant tournaments, we arrive at Tiger’s first real shot at a major win. Only a few shots back heading into the final round at Carnoustie, he went on a front nine tare, taking the lead on #10 after the most “I’m Back Baby” shot of all time out of the fairway bunker. Sadly, the 11th and 12th holes became his crux the last couple of months of the season, ultimately leading to Francesco’s 3rd worldwide win in just 2 months. Another stretch of “meh” events, followed by a big win for JT at the Bridgestone in its last go around at Firestone. Which if my memory serves me right, pushed him to #1 in the FedEx/World for a week. No rest for the weary, as the PGA Championship brought us some of the most exciting golf of the year. Tiger, JT, Brooks all duking it out down the stretch for the final major of the year. This was the one I really thought Tigre was going to take home, but once again Brooks went to the whip and rode it home to his 2nd major of the year, 3rd of his career and his 4th win on the Tour. I don’t think I will ever forget seeing the sea of people awaiting Tiger as he walked off the 18th green, only to multiply by five as he walked up over the grandstand and to the club house.

Some people began to get annoyed with Brooks’, “All I care about is getting swole and going about my business” attitude but he is who he is and that is the most boring star that sports has ever seen. After this we all got information overload and a lesson in science by golf’s mad scientist, Bryson Dechambeau, as he won back to back playoff events. Some say you become more mellow with age, and I would have to say I am very slowly starting to do this in regards to Bryson. Somehow, the guy won 3 times during the season,, 2 of which were playoff events, and he didn’t come close to winning the FedEx Cup. I think we should release Bryson to come up with an algorithm for FedEx Cup scoring.

Then we were given the sweetest cherry on top any golf fan could ask for, Tiger winning the Tour Championship. The ups and downs, highs, and lows, close calls, missed cuts, all to come together at the season finale for his 80th win, was pure magic. I think I was more excited for this win than any other win I have witnessed. The magnitude of the comeback, rising from the ashes, rebuilding his golf game, grinding thru the season and seeing the emotions pour out of him, made it so awesome to watch. Tiger hasn’t been that emotional after a win, since winning his first major after the passing of his father Earl.

Justin Rose put together his most consistent year on tour, claiming the #1 ranking 3 different times this calendar year, and ultimately holding off Tiger to win his first FedEx cup. I think Rosey for sure gets a major win this season, he is a Top-10 machine and seems to really be in a groove. We may see one of the best 24 month stretches (excluding Tiger) in a long time out of the Englishman. 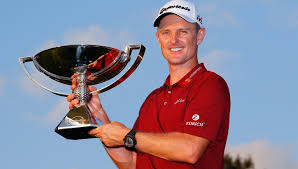 There was the resemblance of a Ryder Cup played at the Chuckey Cheese of Golf Courses, which the European’s won handily. The best part of the entire week was the complete implosion of the US Team starting with the post match presser on Sunday. P Reed and Speith getting into it, DJ and Brooks “getting into a fight” and their better halves being involved, Furyk being criticized, and continued drama to this day basically making it Fat Pat vs. Everybody. There was “The Match” which for a lack of better words was good not great, and then the Hero this past week which could fall under the same umbrella.

All in all, it was a hell of year to be a golf fan. I don’t see it slowing down any this year with 3 of the 4 major venues being places where the GOAT has won before. My expectations are sky-high, so rest easy Cat, put on some weight, get that physio right and we will see you at Torrey Pines when you come out of hibernation. Until then, I’ll be dreaming of warmer days to come.

If you haven’t done so, sign up for our newsletter we are looking to start in the next few weeks.